A koala who became a symbol of hope following Australia’s Black Saturday bushfires has been stuffed and put on display in a museum, following her death.

Sam shot to fame after being pictured drinking from fireman David Tree’s water bottle during the 2008 Melbourne fires, which claimed 173 lives.

Sam herself was badly burnt in the blaze but recovered from the third-degree burns on her paws after being cared for by a volunteer at the Southern Ash Wildlife Shelter, where 100 fire-injured koalas recuperated after the inferno. 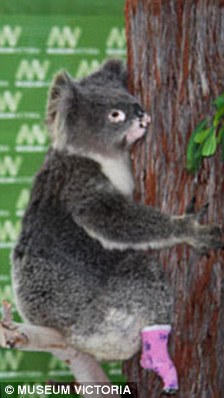 ※PIC--Immortalised: Sam the koala has been stuffed and exhibited at the Melbourne Museum . 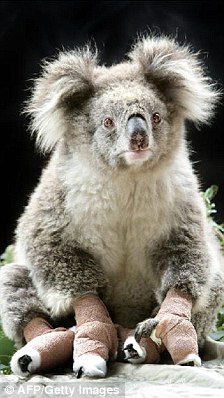 ※PIC--The marsupial shows off her bandages following the bushfires of 2008.

Sadly, Sam died in August last year, after being stricken with Chlamydia, which affects around 50 per cent of Australia’s koala population.

Now Sam, who was even publicly grieved by Prime Minister Kevin Rudd, has been stuffed and is on display at the Melbourne Museum.

The exhibit shows Sam in her recovery phase, complete with pink bandages covering her burns.

Mr Tree said of the exhibit: ‘I think this will give people a chance to get up close and personal with what happened.’ 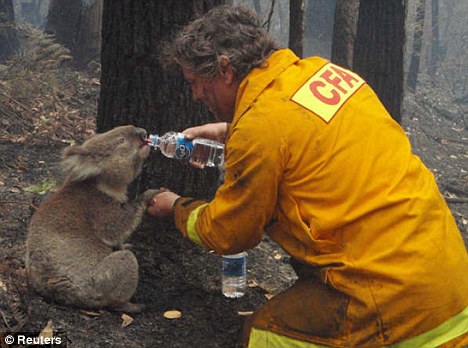 ※PIC--Hope: Sam shot to fame after being pictured taking a drink from fireman David Tree's water bottle during the fires

He told the Herald Sun newspaper: ‘It just shows you not only humans suffer in bushfires, but so do our native wildlife.’

Patrick Greene, who is chief executive of the Museum Victoria, said he hoped the exhibit would educate the public about the tragic fires.

He said: ‘Sam became a symbol of the enormous loss felt by so many in the aftermath of last year’s terrible bushfires, and for this reason I believe it’s important that visitors from Victoria, across Australia and from overseas can see Sam and be reminded of her story and the events of Black Saturday.’ 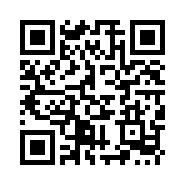